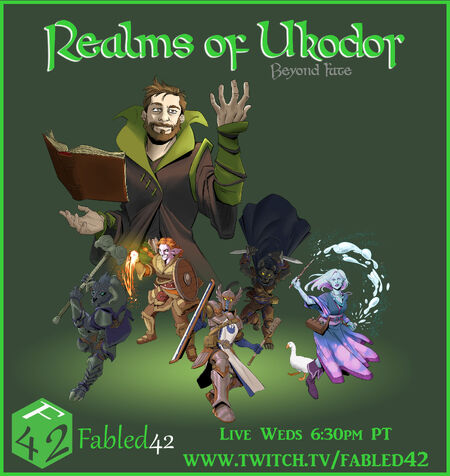 Season 2 takes place in the third age of Ukodor. A group of adventures find themselves in an extraordinary situation. Some are running from their fate, while others running towards it. This adventure will go beyond fate and test their resolve. The world of Ukodor is a 5e homebrew universe created by Dungeon Master Chris Solo.

It has been 40 years since the defeat of the darkness, where the Light Bringers defeated Riha and her armies. We travel three thousand miles south into central Hylak, a foreign land to those who dwell in the lands of men. Hylak is a different from many realms you may have heard of, there are no humans, elves, dwarves or halflings in this realm. This is the land of monsters, well, monsters to the untrained eye. The land of Hylak has a beautiful landscape with mountains and forests as far as the eye can see. It's filled with many amazing creatures such as orcs, goblins, bugbears, gnolls and alike. These creatures are not the ones we’ve been told about in our bedtime stories. They are in fact, just like us in every way imaginable. They are farmers, fishermen, crafters, traders, fathers, mothers and siblings.

You see we have been led to believe that all those creatures are evil and want to destroy our way of living. Well that simply isn’t the case. There are two sides to everyone. There are evil humans and elves as there are good orcs and goblins. Some would say every bit as good and kind as us. That brings me to this new story. A story of several unlikely heroes from different parts of that continent who met it seems for no other reason than fate itself, but my friends this story goes even further, beyond fate.

The Frigid Expanse (Rime of the Frost Maiden)[edit | edit source]

Retrieved from "https://fabled42.fandom.com/wiki/Realms_of_Ukodor_S2?oldid=887"
Community content is available under CC-BY-SA unless otherwise noted.